November 30, 2020Roger McAvoy2020-11, Devotional
Create a peaceful space to pause, and allow yourself to feel God’s presence alongside you, as near to you as your own breath. In following the reflection below, as a church we will draw closer to God and to one another as we grow in faith and deepen our sense of belonging to God.

40 One of them was Andrew, Simon Peter’s brother. 41 At once he found his brother Simon and told him, “We have found the Messiah.” (This word means “Christ.”) 42 Then he took Simon to Jesus. Jesus looked at him and said, “Your name is Simon son of John, but you will be called Cephas.” (This is the same as Peter and means “a rock.”)

It was on 30th November 60AD that Andrew, one of the first of Jesus’ disciples was crucified. He was tied to an X-shaped cross in Greece on the orders of the Roman governor Aegeas. Hence we remember that day each year to acknowledge his courage and faithfulness to the gospel, and seek to follow his example. Some of our greatest heroes are people who do not seek praise and glory, and Andrew was someone happy to be in the background, quietly serving Jesus. He is always referred to as ‘Simon Peter’s brother’, and he lives in the shadow of his more outgoing sibling very much a backroom boy, but playing a crucial role in introducing people to Jesus.

Think about your experiences as older/younger siblings. It’s usually the older child that gets the attention, more pocket money, stays out later, does all sorts of things we can’t do because we are not old enough! When you go to a new school they enquire if you are John’s brother or Karen’s sister and proceed to tell you how clever your sibling is at sports, music and goodness knows what else. 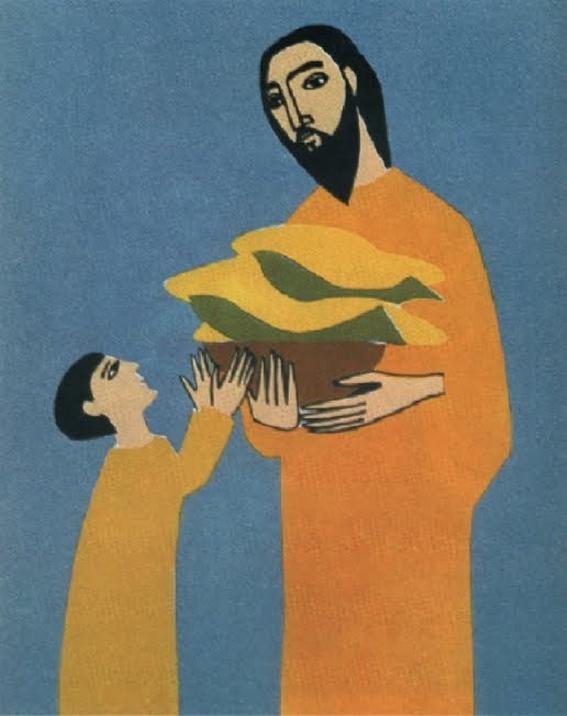 Even in adult life the comparison continues, being introduced as Mary’s husband, or the minister’s wife. You soon get fed up and want to say, “I am me!” Andrew may have always lived in the shadow of his brother, but he was important in his own right. He didn’t need the attention, he just got on with introducing people to Jesus, beginning with his brother.

When Jesus faced 5000 hungry people it was Andrew who finds the boy with loaves and fishes and introduces him to Jesus, even though Philip considered it a hopeless task. Later at the Passover Festival he brings some curious Greek visitors to Jesus. It is as if he anticipates Jesus’ concern not just for Jews but for all people.

As far as we know, Andrew was no great orator or public figure, more a person who worked well with individuals and had the gift of bringing them into contact with Jesus – there is probably no greater gift than that!

God, our loving Father, Andrew introduced Peter, the Greek visitors
and the little boy with loaves and fishes to your Son, Jesus Christ.

May we be like him in sharing friendship and hospitality,
and in faithfulness to Jesus and his kingdom of justice, love and peace.

May our country be a community in which everyone matters,
everyone has an honoured place, and the dignity of each is assured
by our faith in you as Father of us all. Amen

Reflection & Prayer © 2020 Roger McAvoy.
Image freely available online.
A printable version of this Daily Devotional can be downloaded from here
All material within this order of worship is reproduced by permission under CCL 1226356