March 29, 2021Roger McAvoy2021-03, Devotional
Create a peaceful space to pause, and allow yourself to feel God’s presence alongside you, as near to you as your own breath. In following the reflection below, as a church we will draw closer to God and to one another as we grow in faith and deepen our sense of belonging to God.

15 Then they came to Jerusalem. And he entered the temple and began to drive out those who were selling and those who were buying in the temple, and he overturned the tables of the money-changers and the seats of those who sold doves; 16 and he would not allow anyone to carry anything through the temple. 17 He was teaching and saying, ‘Is it not written, “My house shall be called a house of prayer for all the nations”?  But you have made it a den of robbers.’ 18 And when the chief priests and the scribes heard it, they kept looking for a way to kill him; for they were afraid of him, because the whole crowd was spellbound by his teaching. 19 And when evening came, Jesus and his disciples went out of the city.

When The Beatles released the single The Fool on the Hill in 1968, Paul McCartney commented that it was about a man who had the right answers to life but received only ridicule. He may have been thinking about Maharishi Yogi who had influence over The Beatles at that time or some other mysterious figure, but we can so easily equate this ‘fool’ with the life of Jesus who in this Holy Week which includes April Fool’s Day was seen by many as misguided in his speech and conduct and as a result, heading for certain death.

The song goes on to infer that the onlookers are the fools rather than the trouble causer. Sometimes in life we have to take a stand against injustice, whether it be to support ‘Black Lives Matter’ or say ‘violence against women must cease’. For Jesus it was to challenge corruption in Temple courts by upturning the tables of money changers and risk the wrath of those who see their power threatened. He was tired of self-seeking religious leaders parading around in long flowing robes, expecting privileged places at feasts and in the synagogue, expressing long showy prayers, but little interest or concern for the weak and poor. 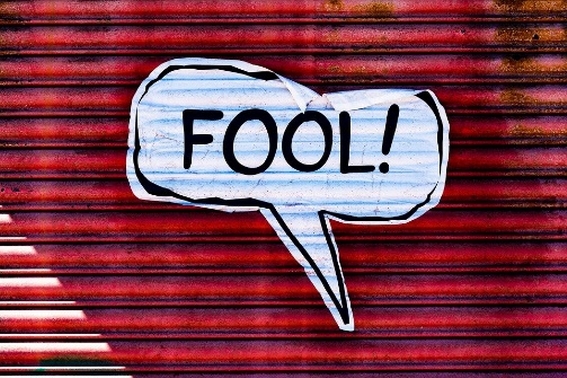 He was willing to risk his life to take a stand against those who sought to corrupt religion for their own selfish benefit and though it cost him his life, it sets us free to love and serve a living God. The test of whether we are laughing at a ‘fool’ or standing alongside Jesus will be seen in our willingness to follow in his footsteps – turning the other cheek, going the extra mile, giving to those whose need is greater than ours, loving our enemies. It is a challenge not for the fainthearted!

Help us Father to follow you into the Temple
and strike out all that hinders your presence in our worship.
Make it a house of prayer for all people.
Help us fearlessly to confront the power hungry,
the self-serving regardless of the cost.
Help us to follow you, Christ the servant. Amen.

Reflection and Prayer © 2021 Roger McAvoy.
Images freely available online.
Quotes from the lyrics of ‘The Fool on the Hill’ are © Lennon/McCartney.
A printable version of this Daily Devotional can be downloaded from here
All material within this order of worship is reproduced by permission under CCL 1226356