April 29, 2020Roger McAvoy2020-04, Devotional
Create a peaceful space to pause, and allow yourself to feel God’s presence alongside you, as near to you as your own breath. In following the reflection below, as a church we will draw closer to God and to one another as we grow in faith and deepen our sense of belonging to God.

1 While Peter and John were speaking to the people, the priests, the captain of the temple, and the Sadducees came to them, 2 much annoyed because they were teaching the people and proclaiming that in Jesus there is the resurrection of the dead. 3 So they arrested them and put them in custody until the next day, for it was already evening. 4 But many of those who heard the word believed; and they numbered about five thousand.

5 The next day their rulers, elders, and scribes assembled in Jerusalem, 6 with Annas the high priest, Caiaphas, John, and Alexander, and all who were of the high-priestly family. 7 When they had made the prisoners stand in their midst, they inquired, ‘By what power or by what name did you do this?’ 8 Then Peter, filled with the Holy Spirit, said to them, ‘Rulers of the people and elders, 9 if we are questioned today because of a good deed done to someone who was sick and are asked how this man has been healed, 10 let it be known to all of you, and to all the people of Israel, that this man is standing before you in good health by the name of Jesus Christ of Nazareth, whom you crucified, whom God raised from the dead. 11 This Jesus is:

“the stone that was rejected by you, the builders;
it has become the cornerstone.”

12 There is salvation in no one else, for there is no other name under heaven given among mortals by which we must be saved.’ 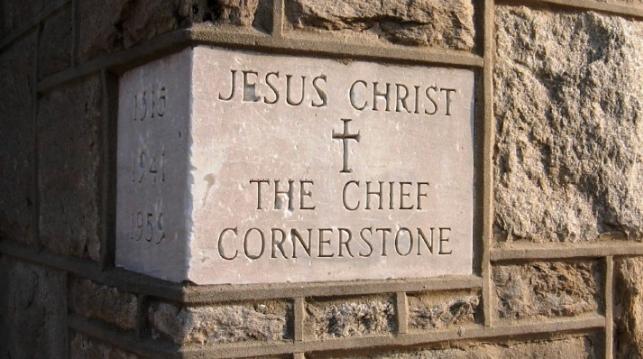 The Jewish nation knew what they were doing when they built their temple in Jerusalem more than two thousand years ago. It had a foundation stone 40ft long, 12ft high, 14ft deep, weighing around 600 tons! Even when the Romans came to destroy the building it was too huge to move so that it remains in place to this day, still solid and secure.

During my teenage years I was part of a small group who built a Sunday School at the rear of our church. After clearing the site and preparing foundations, my grandmother as oldest member was invited to lay the foundation stone. It was a large one, laid at the corner of the building to symbolise all that would be built on it, not just bricks and mortar but the nurturing of our faith in God. We spent the next two years completing the building having assured ourselves that we were building on strong foundations.

No doubt when work begins on the new building at Emmanuel there will be a similar dedication of the building and all the work that will be done within it. As Christians we choose to build our lives on those foundations laid by Jesus Christ. His teaching was reflected in the life he lived, and his triumph over death gives us the assurance of life with him for eternity. Others may ignore or dismiss him, but for us he is the cornerstone of our lives, the one in whom we have confidence whatever we may have to face in life.

‘God of All Power, and Truth, and Grace’
by Charles Wesley

God of all power, and truth, and grace,
which shall from age to age endure,
whose word, when heaven and earth shall pass,
remains and stands for ever sure.

That I your mercy may proclaim,
that all the world your truth may see,
hallow your great and glorious name,
and perfect holiness in me.

Image: freely available online.
Reflection © 2020 Roger McAvoy.
A printable version of this Daily Devotional can be downloaded from here
All material reproduced by permission under CCL 1226356