January 27, 2021Gillian Wood2021-01, Devotional
Create a peaceful space to pause, and allow yourself to feel God’s presence alongside you, as near to you as your own breath. In following the reflection below, as a church we will draw closer to God and to one another as we grow in faith and deepen our sense of belonging to God.

The Word became flesh and made his dwelling among us. We have seen his glory, the glory of the One and Only, who came from the Father, full of grace and truth.

The opening verses of John’s Gospel are so well known and loved as a description of Jesus but we often concentrate on the poetry of the words rather than trying to link them to what we know of Jesus’ life on earth. Recently I came across the following description of Jesus which does link his earthly life to his divinity. It was written many years ago by F.B. Meyer (1847-1929):

Christ was born of a woman; yet he made woman.
He ate and hungered, drank and thirsted;
yet He made corn to grow on the mountains, and poured the rivers from His crystal chalice.
He needed sleep; yet He slumbers not, and needed not to repair His wasted energy.
He wept; yet He created the tear duct.
He died; yet He is the ever-living Jehovah, and made the tree of His cross.
He inherited all things by death; yet they were His before by inherited right.
What else can we do but bow in reverence before such a stupendous miracle!

Occasionally whilst living on earth, Jesus revealed his divinity in the miracles and healings he performed; when he raised people from the dead; in the knowledge he showed of peoples’ thoughts and lives. In all these things he acted for the benefit of others and not for himself. As Paul tells the Philippians: Jesus: “being found in appearance as a man, he humbled himself and became obedient to death – even death on the cross” (Philippians 2:7-8). We have such a wonderful Saviour, it is good sometimes just to stop and marvel at who he is and all he did and continues to do for us. Graham Kendrick says it so well in his hymn, Meekness and Majesty so let that be our prayer.

Meekness and majesty, manhood and deity,
in perfect harmony – the man who is God.
Lord of eternity, dwells in humanity,
kneels in humility and washes our feet. 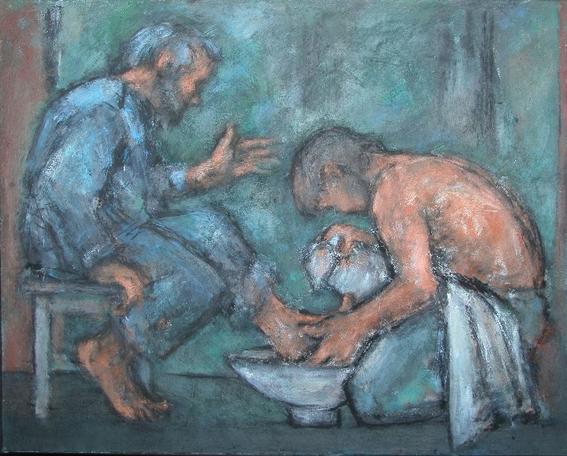 Reflection © 2021 Gillian Wood.
Hymn Words and Music: © 1986, Thankyou Music.
Image © Methodist Modern Art Collection, Trustees for Methodist Church Purposes.
A printable version of this Daily Devotional can be downloaded from here
All material within this order of worship is reproduced by permission under CCL 1226356