April 27, 2021Hazel Blake2021-04, Devotional
Create a peaceful space to pause, and allow yourself to feel God’s presence alongside you, as near to you as your own breath. In following the reflection below, as a church we will draw closer to God and to one another as we grow in faith and deepen our sense of belonging to God.

43 Now there was a woman who had been suffering from haemorrhages for twelve years; and though she had spent all she had on physicians, no one could cure her. 44 She came up behind him and touched the fringe of his clothes, and immediately her haemorrhage stopped. 45 Then Jesus asked, ‘Who touched me?’ When all denied it, Peter said, ‘Master, the crowds surround you and press in on you.’ 46 But Jesus said, ‘Someone touched me; for I noticed that power had gone out from me.’ 47 When the woman saw that she could not remain hidden, she came trembling; and falling down before him, she declared in the presence of all the people why she had touched him, and how she had been immediately healed. 48 He said to her, ‘Daughter, your faith has made you well; go in peace.’ 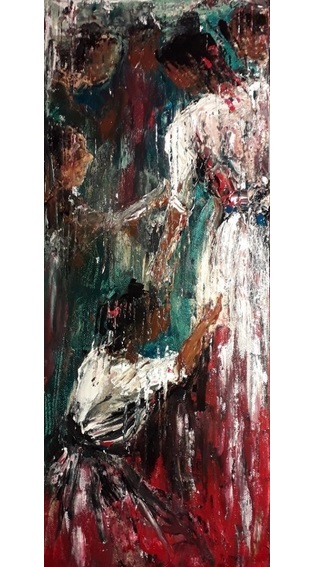 ‘Jesus Heals a Woman with Haemorrhages’
by Ally Barrett
2018, acrylic on canvas.

One Monday morning at prayers we were thinking about Jesus’ miracles of healing. I was struck once again of his humanity. Like us, he experienced anger, temptation, doubt, fear. And he did not heal without cost to himself; often he was exhausted. He could sleep in the daytime in a boat during a violent storm at sea. One day, when he was on his way to see a dying child, a woman in the crowd of people surrounding him got close enough to touch just the hem of his cloak, trusting in his power to heal her, and found that she was indeed healed of a haemorrhage which had plagued her for years. Despite all the folk who were crowding him, Jesus was intuitively aware of her, and of her healing. “Who touched me?” he asked. His disciples replied that they were being jostled by many people, and anyone could have touched him. But this was a touch of faith, and Jesus knew that it had drawn healing power from him. Disregarding her thoughts of anonymity, Jesus sought her out to reassure her that she was restored to health because she believed in him and in his power to heal.

Faith, as the writer to the Jewish church asserts, means putting our full confidence in what we hope for. That sick woman had such faith. We too may put our confidence in our God, who is aware of our needs and will answer our prayers offered in the name of Jesus. So whatever our need, whether for ourselves or for others, if we ask according to his will, we may be sure that they are heard and will be answered.

Lord Jesus, give us such faith as she had to trust in your power to heal. May we know that you forgive and restore us to a right relationship with yourself and with each other. Whatever we need Lord, reassure us of that love which will not let us go.

Thank you, Lord, for your forgiveness of our failings, our lack of trust in your almighty power to restore the brokenness of our lives; and may your peace and joy fill our hearts and minds this day and every day. Amen.

Reflection and Prayer © 2021 Hazel Blake.
Image by Rev. Ally Barrett from www.reverendally.org.
A printable version of this Daily Devotional can be downloaded from here
All material within this order of worship is reproduced by permission under CCL 1226356