February 24, 2021Ann Caffyn2021-02, Devotional
Create a peaceful space to pause, and allow yourself to feel God’s presence alongside you, as near to you as your own breath. In following the reflection below, as a church we will draw closer to God and to one another as we grow in faith and deepen our sense of belonging to God. 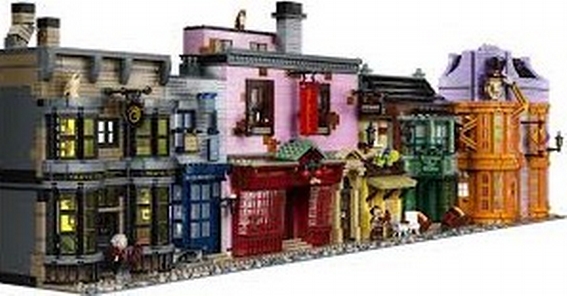 Determination can be a great quality. One of Robert’s grandsons was so set on receiving the Lego kit for Harry Potter’s ‘Diagon Alley’ as a Christmas present that he persuaded various relatives to chip in together, then added all his own pocket money too, so that it became possible. Having waited in high excitement until Christmas Day, it then took him less than a week to assemble the 5544 pieces and produce the finished article pictured above. Determination indeed!

Of course determination in itself isn’t necessarily a virtue – it can be good or bad and there are examples of both in the Bible. No one could approve of David’s determination to possess Bathsheba, deceiving her husband Uriah the Hittite and ensuring that he was killed in battle. Indeed we’re told ‘the thing that David had done displeased the Lord’ (2 Samuel 11:27). Obviously this was an example of bad determination!

On the other hand the book of Daniel tells the commendable story of a spiritually determined young man who had made up his mind to serve and obey God. Daniel wouldn’t be dissuaded from his loyalty to God either by public opinion or private pressures. He may have been a captive, but he chose to obey God’s will rather than take the course of least resistance. He was determined to maintain his godly identity, even when it meant going into the lion’s den. Sometimes we tend to let circumstances govern our closeness to God, when it should, as it was with Daniel, be our closeness to God that governs the way we live.

The two parables above that Jesus told both speak of determination – first of the shepherd who wouldn’t give up until he found the sheep he had lost, and then of the woman who kept searching until her precious coin was discovered. But in both cases Jesus was speaking about the kingdom of heaven and God’s loving determination that not one of his children should be beyond his care, however far we stray and however lost we feel. This is the most wonderful message for everyone, particularly at a time of global turmoil like the one we are experiencing at the moment. God loves us all and when we trust in him, in the famous words of Mother Julian of Norwich, “All shall be well, and all shall be well and all manner of thing shall be well.”

Heavenly Father,
You are our ever-faithful and loving God.
You care for us all without exception.
You support us without fail.

When anxious thoughts plague us,
you cheer us up
with your comforting presence.
When doubts and weakness unsettle us,
you uphold us with your unfailing love.
Without you as our constant help,
we can fall into depression and despair.

Constantly remind us, we pray, of your steadfast love
and grant us the determination to persevere through difficulties,
for your love never ceases
and your help never fails.
Amen.

Reflection & Prayer © 2021 Ann Caffyn.
Image freely available online.
A printable version of this Daily Devotional can be downloaded from here
All material within this order of worship is reproduced by permission under CCL 1226356