January 23, 2021Ann Caffyn2021-01, Devotional
Create a peaceful space to pause, and allow yourself to feel God’s presence alongside you, as near to you as your own breath. In following the reflection below, as a church we will draw closer to God and to one another as we grow in faith and deepen our sense of belonging to God.

The Week of Prayer for Christian Unity 2021: verses from 1 Samuel 17 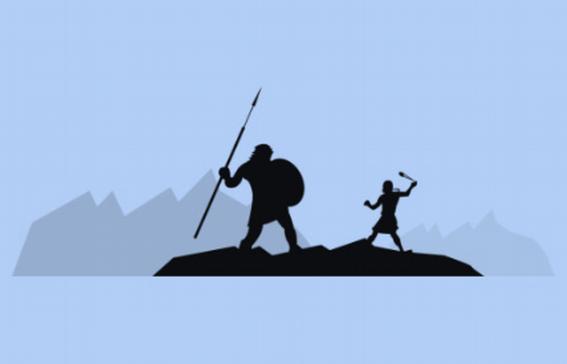 Goliath, the Philistine, came on and drew near to David, with his shield-bearer in front of him.  But David said to the Philistine, “You come to me with sword and spear and javelin; but I come to you in the name of the Lord of hosts, the God of the armies of Israel, whom you have defied.  This very day the Lord will deliver you into my hand, and I will strike you down so that all the earth may know that there is a God in Israel for the battle is the Lord’s and he will give you into our hand.” When the Philistine drew nearer to meet David, David ran quickly toward the battle line to meet the Philistine.  David put his hand in his bag, took out a stone, slung it, and struck the Philistine on his forehead; the stone sank into his forehead, and he fell face down on the ground. So David prevailed over the Philistine with a sling and a stone, striking down the Philistine and killing him.

Getting up later than usual one Saturday morning, we heard some strange noises downstairs and on inspection found our two young daughters having a mock duel with some ferocious kebab sticks that we’d failed to hide safely away! “We found these little swords and thought we’d have a fight,” they said. We shuddered to think what might have happened and thanked God we’d discovered them before any damage had been inflicted!

The verses above are a condensed account of the fight between David and Goliath, a fearsome warrior. David was just a shepherd boy, who offered to fight the feared Philistine, saying ‘I come to you in the name of the Lord of hosts.’ The young lad defeated the renowned warrior, with just sling and stone.

Jesus faced an enemy too but it wasn’t a person, in the way that Goliath was. His enemy was more human nature, an attitude, a mistaken approach to life, personified in the Pharisees, who watched and scrutinized his every action. They interpreted the Law very rigidly and when, for example, Jesus healed people on the Sabbath, in their eyes he was working on the Sabbath which was forbidden. He was breaking the rules and regulations and they were genuinely convinced that he was a bad person.

To Jesus, what mattered was love of God and love of neighbour; he didn’t discount the Law, indeed he said he had come to fulfil it, but he interpreted everything in the light of God’s love and the needs of the world. And that’s what we need to do.

This week we have observed in our Devotions the Week of Prayer for Christian Unity. There is sadly too much that divides Christians in our world today; and often the Church seems as harsh a battleground as the one where David met Goliath, with one faction being the enemy of another. Wars of words lead to as much pain, sorrow and disunity, as battles do with swords and stones.

Let us pray that we, and Christians everywhere, may prayerfully follow the example and command of our Lord, to love God, and to love our neighbour as ourself. When all Christians throughout the world are able to do this, then Christian unity will be a fact!

God our Father, you reveal your love to us through Jesus and through our brothers and sisters. Open our hearts we pray, and those of Christians everywhere, so that we can welcome each other with our differences and live in forgiveness.
Grant that we may live united in one body, so that the gift that is each person comes to light. May all of us together be a reflection of the living Christ. In Jesus’ name. Amen.

Reflection & Prayer © 2021 Ann Caffyn.
Image freely available online.
A printable version of this Daily Devotional can be downloaded from here
All material within this order of worship is reproduced by permission under CCL 1226356