January 22, 2021Barrie Tabraham2021-01, Devotional
Create a peaceful space to pause, and allow yourself to feel God’s presence alongside you, as near to you as your own breath. In following the reflection below, as a church we will draw closer to God and to one another as we grow in faith and deepen our sense of belonging to God.

10 He was in the world, and the world came into being through him; yet the world did not know him. 11 He came to what was his own, and his own people did not accept him. 12 But to all who received him, who believed in his name, he gave power to become children of God, 13 who were born, not of blood or of the will of the flesh or of the will of man, but of God. 14 And the Word became flesh and lived among us, and we have seen his glory, the glory as of a father’s only son, full of grace and truth. 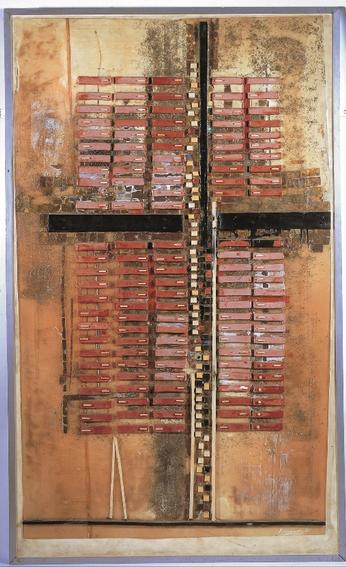 The Methodist Modern Art Collection has this intriguing piece: The Cross Over the City by the artist Michael Edmonds. Although he was born in Dorset, Edmonds was a ‘Bevin Boy’ evacuated to South Wales, and spent much of his life in Cardiff. Since he worked mainly for the National Coal Board, it’s not surprising that he experimented with a variety of materials and styles. One of his sculptures (in metal, resin and fibreglass) can be seen in Penarth’s Trinity Methodist Church. So The Cross over the City is a relief panel rather than a painting – each part of it standing boldly out from the wall on which it hangs. Michael Edmonds has made an upright cross, with a strong black horizontal line, superimposed upon an array of 130 rectangular red blocks – which almost look like container lorries (rather reminiscent of those filling spaces in Kent just recently). From a distance, it also looks like an aerial photograph of traffic on a major road crossing a road or railway cutting, both passing through a rigidly uniform estate of urban housing blocks.

The result gives us a real sense of Jesus’s death being for the world. It was no execution on the edge of a city, but something so profound that the world would never be the same again. John’s Gospel begins with the assertion that ‘He was in the world’, and Christians claim that this Jesus is no visitor from beyond this planet, some extra-terrestrial being, or someone who only appeared to be human…but flesh of our flesh.

Michael Edmonds has, I think, captured the two central tenets of the Christian faith: that God truly became human, and so identified with us – his sisters and brothers – that he died a human death, to bring all who believe in his name to eternal life. And through this mystery of love, as John reminds us, we can become ‘children of God’ and share in his glory.

Then let us stand beneath the cross, and feel his love a healing stream,
all things for him account but loss, and give up all our hearts to him;
of nothing think or speak beside: my Lord, my Love is crucified.
(from StF 278 O Love Divine, What Have You Done, by Charles Wesley)

Ever living, ever loving God, the cross of your Son casts its shadow over world across the ages. May we, your children, live as your redeemed people and, as you shared in our humanity, grant that we may share in your divinity, through Jesus Christ our Risen Lord. Amen.

Reflection © 2021 Barrie Tabraham.
Image © Methodist Modern Art Collection, © Trustees for Methodist Church Purposes.
Hymn words out of copyright.
A printable version of this Daily Devotional can be downloaded from here
All material within this order of worship is reproduced by permission under CCL 1226356