December 21, 2020Gordon Harrison2020-12, Devotional
Create a peaceful space to pause, and allow yourself to feel God’s presence alongside you, as near to you as your own breath. In following the reflection below, as a church we will draw closer to God and to one another as we grow in faith and deepen our sense of belonging to God.

2 But you, O Bethlehem of Ephrathah, who are one of the little clans of Judah, from you shall come forth for me one who is to rule in Israel, whose origin is from of old, from ancient days.
4 And he shall stand and feed his flock in the strength of the Lord, in the majesty of the name of the Lord his God. And they shall live secure, for now he shall be great to the ends of the earth; 5 and he shall be the one of peace. 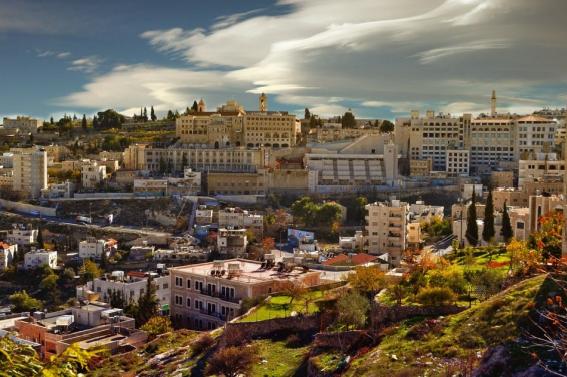 Bethlehem is six miles south of Jerusalem. The close proximity of these two places surprised me – the place of nativity and crucifixion – Bethlehem is indeed a place of contrasts. It was a relatively insignificant small town (as Micah declares) yet it must have been proud of its association with King David.

Bethlehem today is a commercial town of 28,000 inhabitants, situated in the West Bank area of Israel and therefore under the control of the Palestinian Authority. A divisive security wall now makes the journey longer than the 25 mins it took me to travel by bus from Jerusalem to Bethlehem, passing ‘Shepherds Fields’ on my left. Tensions between Palestinians and Israelis have been, and remain, a major issue. As I arrived in Manger Square, I noticed Israeli soldiers with rifles at the ready, on patrol one hundred metres away from the birthplace of Jesus, the ‘Prince of Peace’. The irony of this was only too apparent.

Alighting from the bus I was met by a group of children, many no doubt from Muslim families, determined to sell various Christian artefacts – plastic rosaries, olive wood donkeys and crucifixes – the latter another reminder of Jerusalem. Inside the large Church of the Nativity a shrine marks the supposed birthplace of Jesus. This is a small stone crypt and has no resemblance to the original stable or cave. Nevertheless, stepping inside it a visitor (or should I say ‘pilgrim’) has to stoop and lower the head – a symbolic act of reverential humility.

I walked from this holy shrine to a hospitable hairdresser who gave me the best ever haircut, during which I was given a glass of cool fruit juice…from the holy to the human! Then for me it was the short return journey to Jerusalem.

Bethlehem and Jerusalem act as ‘bookends’ of Christ’s short life. St, John calls Christ “the bread of life”, a fitting reminder that Bethlehem (the name of which means ‘the House of Bread’) gave birth to a Gospel that nourishes and heals a world in which so many ‘hunger and thirst’ in different ways. So, as we focus again this Christmas on the ‘little town of Bethlehem’, may it be that our thoughts encompass not only sentiment but also the stark realities of life today worldwide and in that special place of pilgrimage. Of course, now with the added health concerns that we all share.

May the Christ-like staple diet of hope, love and peace infuse and, in time,
transform the divisions, distrust and despair
that currently characterise Middle Eastern politics and life.
May the same qualities support and strengthen all who struggle for whatever reason. Amen.

Address and Prayer © 2020 Gordon Harrison.
Image is freely available online.
A printable version of this Daily Devotional can be downloaded from here
All material within this order of worship is reproduced by permission under CCL 1226356