May 19, 2020Ann Caffyn2020-05, Devotional
Create a peaceful space to pause, and allow yourself to feel God’s presence alongside you, as near to you as your own breath. In following the reflection below, as a church we will draw closer to God and to one another as we grow in faith and deepen our sense of belonging to God.

Elijah was afraid and went a day’s journey into the wilderness, and came and fell asleep under a solitary broom tree. Suddenly an angel touched him and said to him, “Get up and eat otherwise the journey will be too much for you.”   He looked, and there at his head was a cake baked on hot stones, and a jar of water. He got up, and ate and drank; then he went in the strength of that food forty days and forty nights to Horeb the mount of God.  At that place he came to a cave, and spent the night there. Then the word of the Lord came to him, saying, “What are you doing here, Elijah?”   “Go out and stand on the mountain before the Lord, for the Lord is about to pass by.” Now there was a great wind, so strong that it was splitting mountains and breaking rocks in pieces before the Lord, but the Lord was not in the wind; and after the wind an earthquake, but the Lord was not in the earthquake;  and after the earthquake a fire, but the Lord was not in the fire; and after the fire a sound of sheer silence.  When Elijah heard it, he wrapped his face in his mantle and went out and stood at the entrance of the cave. Then there came a voice to him that said, “What are you doing here, Elijah?” 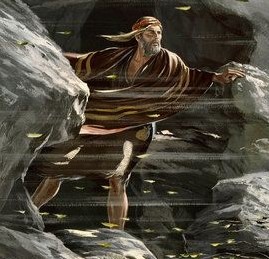 This reading is much abbreviated, you can read it in full in 1 Kings 19. It’s a story of a scared Elijah running away from Jezebel, from the place where God has put him, and despite his disobedience he is cared for by an angel, who brings him food. Again he runs away and hides, and twice he is asked, “What are you doing here, Elijah?”.

It’s a question we all have to answer at times in our lives. However, at the moment the emphasis is different. Usually the question is, ‘What are you doing here?” but for us now it’s, “What are you doing here?”. Our lives at present are circumscribed by rules about where we can (or mostly can’t) go. We’re in lockdown so we have no choice but to be here. However, we do have a choice about our what we do, and we need to be sure we are doing what God wants us to do.

Don’t we often have fears and feel over-whelmed by the situation we’re in? Do we never try and do things by ourselves? Can we truthfully say we have never felt isolated from God? As he did with Elijah, God comes to us where we are and asks us to voice our fears to him, as many times as we need to. Then he lifts us in his loving arms and sets us on the right path again.

Reflection and Prayer © 2020 Ann Caffyn.
Image freely available online.
A printable version of this Daily Devotional can be downloaded from here
All material reproduced by permission under CCL 1226356