June 19, 2021Paul Tabraham2021-06, Devotional
Create a peaceful space to pause, and allow yourself to feel God’s presence alongside you, as near to you as your own breath. In following the reflection below, as a church we will draw closer to God and to one another as we grow in faith and deepen our sense of belonging to God.

18 I will arise and go to my father, and I will say to him, “Father, I have sinned against heaven and before you; 19 I am no longer worthy to be called your son; treat me as one of your hired servants.”’ 20 And he arose and came to his father. But while he was yet at a distance, his father saw him and had compassion, and ran and embraced him and kissed him.

I started playing the trumpet when I was 11 or 12. Unbeknownst to me, my piano-teaching, organ-playing, choir-singing, musical mother had a quiet word with my music teacher in secondary school – knowing that young boys are usually far more receptive to other people’s ideas more than their own parents! I had a great trumpet teacher – Simon he was called, and he really did teach me everything I know about trumpet playing, playing in orchestras and bands. I began on an eighth-hand, dodgy instrument which eventually just wore out. When I needed to borrow one for a few weeks my kind teacher lent me his spare trumpet – which was fairly old and used – but still a Vincent Bach trumpet. (If you have no idea what this means, the automotive equivalent would be an eight-year-old Bentley: yes, a few miles on the clock, but still top-level quality). 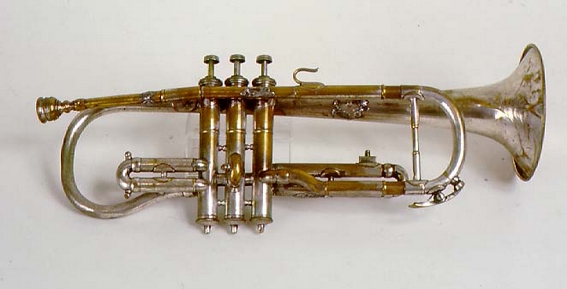 The first week I used it, I did something I NEVER would normally do… I picked up the trumpet holding only the mouthpiece. Now, brass players know the mouthpiece is not fixed to the rest of the trumpet…consequently the remainder of the instrument fell 2-3 feet onto the floor right onto the bell which immediately crumpled – it’s thin brass after all, not steel. Tears (mine) flowed in a quantity that would have rivalled Genesis 7:17. Later that day, my trumpet teacher arrived for my lesson and I showed him what I’d done. To my astonishment, amazement, relief and more – he saw my red eyes, forgave me in an instant, told me he’d been meaning to have a few dents on it sorted anyway and now was the perfect opportunity to do it.

You know the story in Luke 15 – that’s why I’ve only given you a couple of verses from it. The Son in the story deserves goodness knows what for all that he has done…but the Loving Father sees him from far away, runs to him, and holds him close. What is grace if not this? That we, as flawed, sinful creatures who abuse our planet, ignore injustice, perpetuate discrimination and far more, deserve all the approbation that could come our way. Yet – our loving, gracious and grace-full God reaches out to us in love and calls us to live with him in our hearts once more. Be in no doubt, the grace of God has already been given to us, we just need to know it, feel it, and live life in the knowledge of God’s love and mercy – and it’s given just for you, and just for me.

Son of God, if your free grace again has raised me up,
called me still to seek your face, and given me back my hope;
still your timely help afford, and all your loving-kindness show:
keep me, keep me, gracious Lord, and never let me go! AMEN.

Reflection © 2021 Paul Tabraham.
Image freely available online.
Hymn words by Charles Wesley (1707-1788) are no longer in copyright.
A printable version of this Daily Devotional can be downloaded from here
All material within this order of worship is reproduced by permission under CCL 1226356