January 16, 2021Paul Tabraham2021-01, Devotional
Create a peaceful space to pause, and allow yourself to feel God’s presence alongside you, as near to you as your own breath. In following the reflection below, as a church we will draw closer to God and to one another as we grow in faith and deepen our sense of belonging to God.

15 When Gideon heard the telling of the dream and its interpretation, he worshipped; and he returned to the camp of Israel, and said, ‘Get up; for the Lord has given the army of Midian into your hand.’ 16 After he divided the three hundred men into three companies, and put trumpets into the hands of all of them, and empty jars, with torches inside the jars, 17 he said to them, ‘Look at me, and do the same; when I come to the outskirts of the camp, do as I do. 18 When I blow the trumpet, I and all who are with me, then you also blow the trumpets around the whole camp, and shout, “For the Lord and for Gideon!”’ 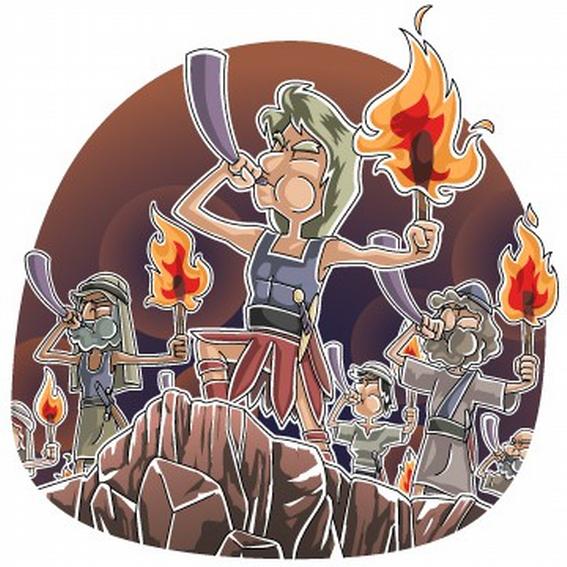 A rare piece of Judges for you today! Earlier in Judges, Gideon has been called by God to gather an army together to defeat the Midianites who themselves had conquered the Israelites. And, (in an account that is reminiscent of the film 300, which was based on the Battle of Thermopylae in 480 BC), the army of 300 prevail and the Midianites are routed. Hooray, it seems, for the Israelites.

Personally, I feel rather uncomfortable with the way some of these events of are described: defeat in battle is assumed automatically to be because of sin; success in war is automatically considered a gift from God. Personally, I could never attribute to God the actions – ‘atrocities’ is a better word – that Gideon & Co. committed in 7:25, 8:16, 8:17, 8:21…I’ll stop there. Still, that’s precisely why we don’t read the Bible without paying great care and attention to its context, genre, who was writing, and for whom. Ignoring these things could lead you into a real theological muddle, from which you’d do well to escape!

However, what you and I can take from this story though, is some of the characteristics of those involved – which stands the test of time, context, authorship and the rest. Gideon hears God’s call and responds; God helps Gideon recognize the sin and idolatry of the people that is leading them into deeply unhealthy living and lifestyles. Gideon also has a profound trust in God: he starts with an army of 32,000 but God whittles it down to the 300 alone that Gideon will need. I’d have asked God for the full 32,000, personally, but Gideon does exactly as he is told, and his faith and trust are repaid. These qualities of faith are attributes we can seek to aspire to.

Today is the 300th Daily Devotion Emmanuel has provided, and these milestones don’t pass me by without a pause and a sense of thanksgiving. With an ‘army’ of 15-17 thoughtful and gifted writers, we have been encouraged and enabled to read scripture, reflect, and pray each and every day to our heavenly father. That’s not to blow anyone’s trumpet – let’s leave that to Gideon – but rather to acknowledge and give thanks for all those who help us to connect to God and to one another in our daily discipleship. May it all be ‘for the Lord’.

God of strength and might, you call us to serve and follow you day by day;
to hear your call, and to follow where you lead; to trust you even when times are hard,
and we’re tempted to rely on our own strength – forgetting that you are all we need.
Grant us your Spirit’s power to learn, to listen and to trust. In Jesus’ name we pray. Amen.

Reflection and Prayer © 2021 Paul Tabraham.
Image © 2007-2020 Ministry-to-Children.
A printable version of this Daily Devotional can be downloaded from here
All material within this order of worship is reproduced by permission under CCL 1226356