August 13, 2020Paul Tabraham2020-08, Devotional
Create a peaceful space to pause, and allow yourself to feel God’s presence alongside you, as near to you as your own breath. In following the reflection below, as a church we will draw closer to God and to one another as we grow in faith and deepen our sense of belonging to God.

23 And when he got into the boat, his disciples followed him. 24 A gale arose on the lake, so great that the boat was being swamped by the waves; but he was asleep. 25 And they went and woke him up, saying, ‘Lord, save us! We are perishing!’ 26 And he said to them, ‘Why are you afraid, you of little faith?’ Then he got up and rebuked the winds and the sea; and there was a dead calm. 27 They were amazed, saying, ‘What sort of man is this, that even the winds and the sea obey him?’ 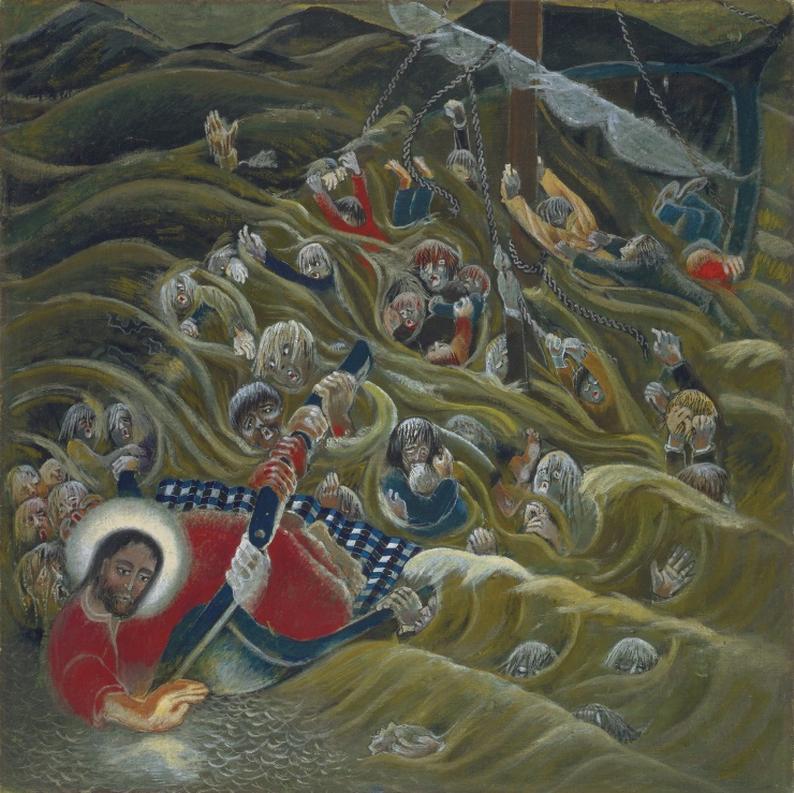 Recently I used one of Eularia Clarke’ paintings for a Sunday service online ‘The 5000’ – the picnic scene which shows the feeding miracle as a church outing in the form of a fish ‘n’ chip supper! Although it’s by the same artist, this painting however, seems to me to keep humour out of it altogether.

This painting takes the ‘gale’, ‘waves’ and the ‘boat being swamped’ at the Gospel writer’s word. The sea is green, black, turbulent; the faces in this scene are scared and desperate. Eularia Clarke herself wrote: “I was thinking of drowning people, how they clutch at absolutely anything; a bit of rope, a person’s hair, clothes, anything… If you are clinging to the gunwale, people with nothing to hold on to will soon start clutching at you, this often happens over religion. But the main thing in the picture is the power of Christ’s calming, which is a common experience” (1).

I find this painting both disturbing and comforting. In the faces of those already overboard or swamped I see the Covid-19 patients struggling to breathe, begging nurses not to let them die; the bloodied Lebanese people fleeing an horrendous blast, shocked and battered. If the storm on the lake had happened in the 21st Century it would have been captured on one of the disciples’ mobile phones…as it is Eularia Clarke captures the terror for us. And yet, as she intended, the eyes surveying the faces are drawn to Jesus; beneath the waves the sea is calm and Jesus’ light and power are present – and stronger. This image says that we do not suffer alone, for Christ is here; that fear, disaster, even death itself are subject to Christ’s calming, consoling, life-giving presence. John Bell and Graham Maule capture this beautifully in the last verse of the hymn ‘As if You Were Not There’. If you can, read it through slowly in its entirety, praying through the words which disturb and sadden, and yet like this painting, inevitably draw us to closer to Christ.

(1) p.170 ‘Eularia Clarke, Painter of Religion’ by Rebecca Sherlaw Johnson, 2017, Stonesfield: Books with Spirit.
Reflection © 2020 Paul Tabraham.
‘Storm Over the Lake’ by Eularia Clarke (1914-1970), 1963, Oil on canvas, Methodist Modern Art Collection, © Trustees for Methodist Church Purposes.
Hymn words ‘As if You Were Not There’ © 1989, WGRG, Iona Community, Glasgow G2 3DH.
A printable version of this Daily Devotional can be downloaded from here
All material within this order of worship is reproduced by permission under CCL 1226356