April 13, 2020Barrie Tabraham2020-04, Devotional
Create a peaceful space to pause, and allow yourself to feel God’s presence alongside you, as near to you as your own breath. In following the reflection below, as a church we will draw closer to God and to one another as we grow in faith and deepen our sense of belonging to God.

6 Then Simon Peter came, following him, and went into the tomb. He saw the linen wrappings lying there, 7 and the cloth that had been on Jesus’ head, not lying with the linen wrappings but rolled up in a place by itself. 8 Then the other disciple, who reached the tomb first, also went in, and he saw and believed; 9 for as yet they did not understand the scripture, that he must rise from the dead. 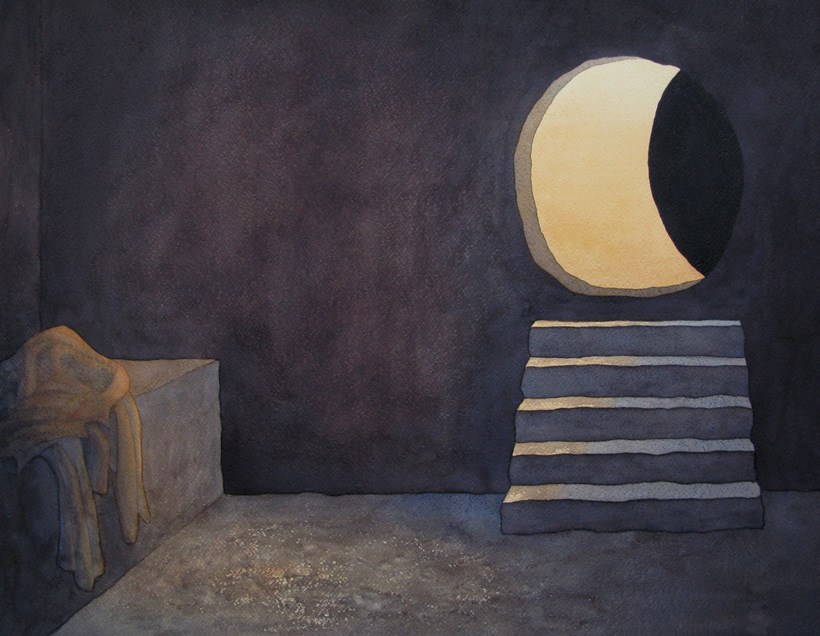 ‘The Empty Tomb’ by Richard Bavin

Richard Bavin’s painting The Empty Tomb asks us to imagine what it was like, moments after Jesus had left the tomb and had walked out into the garden in the early morning. His grave-clothes lie in a discarded heap on the left, and the steps simply point us to the light – where the Risen Christ is to be found.

The incredible thing about the first Easter, is that we are told the beloved disciple ‘saw and believed’ – even though he had not yet seen his Risen Lord. Mary and Thomas didn’t believe until they saw Jesus. But the beloved disciple comes to Easter another way. He believes without seeing. He doesn’t hear Jesus, like Mary; he doesn’t see him, like Thomas. He believes in resurrection in the light of Jesus’ absence.

You and I are in a similar position, in a way. We believe on the basis of the words ‘he is not here’. The Risen Christ said to his friends, ‘Blessed are those who have not seen, and yet believe.’ It’s about trust. The beloved didn’t have ‘proof’ in the sense we usually mean, but he had a relationship with Jesus – his own experience of Christ’s love, an undying love that would never let him go. That was enough, and – even in our darkest days of pain and doubt – may it be so for us. And then we, this Easter, will assuredly find that we are truly blessed.

Loving, gracious God, we thank you for the witness of all who have gone before us who,
like the beloved disciple, had an unwavering faith in their Risen and ever-present Lord Jesus Christ.

Lead us through our doubts to an assurance of your presence with us, here and now. Give us strength to endure whatever each day may bring, and may we so delight in your undying love for each one of us, that we may have hope for the future and a renewed vision of the days to come, through our Risen Lord. Amen.

‘The Empty Tomb’ from the Methodist Modern Art Collection © Trustees for Methodist Church Purposes. The Methodist Church Registered Charity no. 1132208.
Reflection & Prayer © 2020 Barrie Tabraham
A printable version of this Daily Devotional can be downloaded from here
All material within this order of worship is reproduced by permission under CCL 1226356