September 12, 2020Roger McAvoy2020-09, Devotional
Create a peaceful space to pause, and allow yourself to feel God’s presence alongside you, as near to you as your own breath. In following the reflection below, as a church we will draw closer to God and to one another as we grow in faith and deepen our sense of belonging to God.

1 I therefore, the prisoner in the Lord, beg you to lead a life worthy of the calling to which you have been called, 2 with all humility and gentleness, with patience, bearing with one another in love, 3 making every effort to maintain the unity of the Spirit in the bond of peace. 4 There is one body and one Spirit, just as you were called to the one hope of your calling, 5 one Lord, one faith, one baptism, 6 one God and Father of all, who is above all and through all and in all.

‘What have the Romans ever done for us?’

You may be familiar with the above words of John Cleese in the Monty Python film The Life of Brian, where he suggests the Romans have done nothing worthwhile for the Jewish nation, until his friends point out a whole list of benefits, including the provision of roads. Roads were built throughout the Empire primarily for movement of troops and goods to maintain control of their territory, but they also came at the ideal moment for the birth of Christianity, enabling missionaries like St. Paul to travel far and wide to spread the gospel. With the conversion of the Emperor Constantine in 313AD and the adoption of the Christian faith as the official religion of Rome, suddenly all doors were open to the proclamation of the gospel. 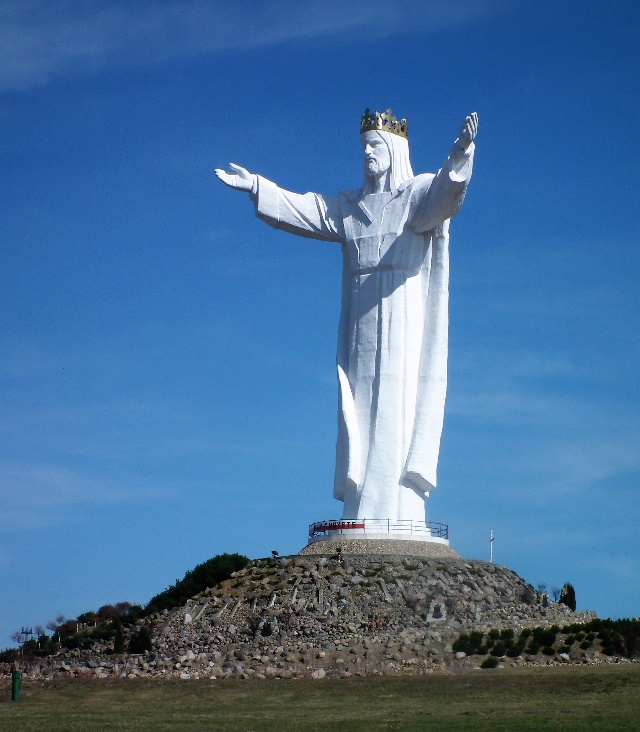 ‘Christ the King’ statue in Świebodzin, Poland.
At 172 feet, it’s the tallest statue of Jesus in the world.

A recent discovery at Vindolanda, the excavated Roman fort on Hadrian’s Wall has revealed a chalice covered with Christian symbols dating back to the fourth century as well as foundations of an early fifth or sixth century church, evidence of the rapid spread of the faith to one of the furthermost parts of the Roman Empire. We hear little of Constantine these days – or the sixty or so monarchs who have ruled our country in the following 1600 years, but the good news of the life of Christ has been celebrated in every age and continues to be proclaimed throughout our land in the present day.

As Charles Wesley puts it in one of his hymns:

‘Names and sects and parties fall,
but thou O Christ art all in all.
(StF 676 Christ, From Whom All Blessings Flow)

We have the immense privilege and responsibility to ensure that we maintain the faith we have inherited and offer it to the next generation.

Lord, direct us along the roads you have provided
to meet those who hunger to hear the Gospel.
Open our mouths to speak words of hope,
and hearts to share the burdens of others.
May everything about us reflect the life Jesus lived amongst us. Amen.

Reflection © 2020 Roger McAvoy. Image freely available online.
A printable version of this Daily Devotional can be downloaded from here
All material within this order of worship is reproduced by permission under CCL 1226356

[box style="1"] '‘The Release of Forgiveness’ Join us today for a short online Worship Service, led by Rev. Paul Tabraham.…