July 11, 2020Ann Caffyn2020-07, Devotional
Create a peaceful space to pause, and allow yourself to feel God’s presence alongside you, as near to you as your own breath. In following the reflection below, as a church we will draw closer to God and to one another as we grow in faith and deepen our sense of belonging to God.

Paul and Silas were thrown into prison in the innermost cell, with their feet fastened in the stocks. 25 About midnight Paul and Silas were praying and singing hymns to God, and the other prisoners were listening to them. 26 Suddenly there was such a violent earthquake that the foundations of the prison were shaken. At once all the prison doors flew open, and everyone’s chains came loose. 27 The jailer woke up, and when he saw the prison doors open, he drew his sword and was about to kill himself because he thought the prisoners had escaped. 28 But Paul shouted, “Don’t harm yourself! We are all here!” 29 The jailer called for lights, rushed in and fell trembling before Paul and Silas. 30 He then brought them out and asked, “Sirs, what must I do to be saved?” 31 They replied, “Believe in the Lord Jesus, and you will be saved – you and your household.” 32 Then they spoke the word of the Lord to him and to all the others in his house. 33 At that hour of the night the jailer took them and washed their wounds; then immediately he and all his household were baptized. 34 The jailer brought them into his house and set a meal before them; he was filled with joy because he had come to believe in God – he and his whole household. 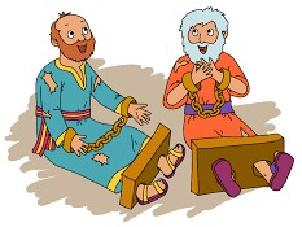 Being in lockdown may have felt a bit like being in prison. It certainly limited what we were able to do, although it was nothing like being chained with our feet in the stocks as was the case with Paul and Silas. I love to think of them singing hymns and praying aloud to God at midnight, despite the precariousness of their situation! It’s something we can all learn from – no matter how difficult things are, we must always pray to God and praise him. It never fails to help us too.

Now that restrictions are being eased and we are able to get about and do more, once again we can learn from the example of Paul and Silas. When their chains fell off and the doors of the prison burst open, what was their first thought? They could have escaped quite easily, but no, they unhesitatingly reassured the jailer that they were still there and, at his request, ‘spoke the word of the Lord’ to him and to everyone else there. The result was amazing – the whole household was baptized in the middle of the night!

Rather than thinking of ourselves first, during this time of new freedoms, we must put others first. If we are willing to speak to them of our faith and what it means to us, to tell them the good news of Jesus and how he has changed our lives, just imagine how amazing that could be for them and for the world.

Lord God, so many times in history your followers, have been, like Paul and Silas, literally in chains because of their beliefs. Their faith has remained strong and their witness fervent.

Throughout our world today, the Covid-19 pandemic has caused restraints of many kinds to be imposed on everyone – not actual shackles, but restricting nonetheless. Like Christians everywhere, we have done our utmost to continue your work in these difficult circumstances.

As the limitations now begin to ease may we, like Paul and Silas, think first of others. May our witness be no less constant and our willingness to serve your children as strong as before. This we ask in Jesus’ name. Amen.

Reflection © 2020 Ann Caffyn.
Image freely available online.
A printable version of this Daily Devotional can be downloaded from here
All material within this order of worship is reproduced by permission under CCL 1226356