January 11, 2021Matthew Earl2021-01, Devotional
Create a peaceful space to pause, and allow yourself to feel God’s presence alongside you, as near to you as your own breath. In following the reflection below, as a church we will draw closer to God and to one another as we grow in faith and deepen our sense of belonging to God.

9 In those days Jesus came from Nazareth of Galilee and was baptized by John in the Jordan. 10 And just as he was coming up out of the water, he saw the heavens torn apart and the Spirit descending like a dove on him. 11 And a voice came from heaven, ‘You are my Son, the Beloved; with you I am well pleased.’ 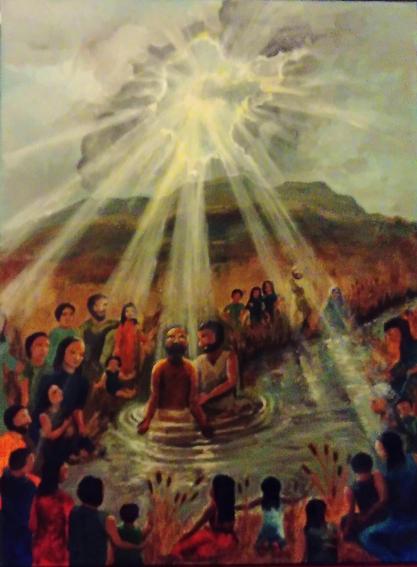 ‘The Baptism of Christ ’
by Ally Barrett 2017
Acrylic on Canvas

One of the films I watched over Christmas was ‘Shadowlands’, the story of how C.S. Lewis, a confirmed bachelor, who met Joy Gresham. Gradually became friends and then fell in love. Joy was a Jew, turned atheist, turned Communist and through C.S. Lewis she became a Christian. He found his match in her – intelligent and rebellious. She described herself when she came to know Christ as ‘the world’s most surprised atheist’ and Lewis said that ‘every story of conversion is a story of blessed defeat’. The couple married but because of her illness only had a few years after that before Joy died.

Similarly, John the Baptist was surprised whilst he was baptising folk in the Jordan when, suddenly in front of him, stood Jesus. John said to him that he, John, should be the one being baptised by Jesus, but Jesus said ‘let it be so for now’. Three of the gospels in particular convey Jesus as being anointed as God’s servant and Son with the gift of the Spirit. We are reminded of when the Israelites passed safely through the Red Sea and under the cloud and all were baptised as followers of Moses: Jesus was fulfilling what was in the Scriptures.

Through his baptism Jesus was ready for what lay ahead. The prophets Isaiah, Zechariah, Daniel and Ezekiel were visionaries and used beautiful prose. Zechariah had the prophesy of a King and Shepherd pouring out a spirit of compassion and supplication years before Jesus was born who would be riding a donkey. How remarkable that Zechariah foresaw that God’s son would be put to death on a cross.

Jesus knew what his task was and hanging on the cross was not the end. He came out of the tomb alive and as we once again relive the life of Christ, we can be assured that whatever experiences we have that we are not alone. We can bring our families, friends, neighbours, work colleagues and situations around the world to God through prayer, knowing that he will listen to us and comfort all who are troubled or who mourn.

Epiphany is a jewel, multifaceted, flashing colour and light,
Epiphany embraces the nations of the world, kneeling on a bare floor before a child.
Epiphany shows a man kneeling in the waters of baptism.
Epiphany reveals the best is kept for last, as water becomes wine at the wedding feast.
O Holy One to whom was given the gifts of power and prayer, and the gift of suffering;
help us to use these same gifts in your way and in your name. Amen.

Reflection © 2020 Matthew Earl.
Image © 2019 Ally Barrett https://reverendally.org.
Epiphany Prayer by Kate Mcllhagga from ‘Shine On, Star of Bethlehem’ © 2004, Canterbury Press.
A printable version of this Daily Devotional can be downloaded from here
All material within this order of worship is reproduced by permission under CCL 1226356