May 10, 2021Matthew Earl2021-05, Devotional
Create a peaceful space to pause, and allow yourself to feel God’s presence alongside you, as near to you as your own breath. In following the reflection below, as a church we will draw closer to God and to one another as we grow in faith and deepen our sense of belonging to God.

22 Then one of the leaders of the synagogue named Jairus came and, when he saw him, fell at his feet 23 and begged him repeatedly, ‘My little daughter is at the point of death. Come and lay your hands on her, so that she may be made well, and live.’

38 When they came to the house of the leader of the synagogue, he saw a commotion, people weeping and wailing loudly. 39 When he had entered, he said to them, ‘Why do you make a commotion and weep? The child is not dead but sleeping.’ 40 And they laughed at him. Then he put them all outside, and took the child’s father and mother and those who were with him, and went in where the child was.  41 He took her by the hand and said to her, ‘Talitha cum’, which means, ‘Little girl, get up!’  42 And immediately the girl got up and began to walk about (she was twelve years of age). At this they were overcome with amazement. 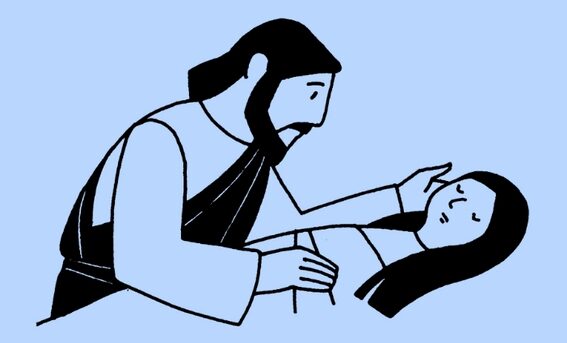 In today’s society there are so many conflicting beliefs, ideas and solutions, with endless theories on social media. In days not so long ago, problem-solving relied on family traditions, ‘old wives’ tales’ and word of mouth! Science and medicine have exceeded our wildest dreams since the time of Jesus. However, we have probably all been in a situation where we have to turn to someone we otherwise wouldn’t, to answer or solve a problem.

This story of Jairus and his daughter is such a story, because to ask Jesus for help was quite something, as Jesus was seen as an impostor by the Jewish officials. Jairus, like some others amongst them, decided to submit to Jesus and his power, as he did not know what else to do. Unlike Nicodemus in John’s Gospel, who felt he could only meet Jesus under cover of darkness, this official did so in public and full of humility. Jairus believed in what Jesus could do.

There are many people around the world who, because of their faith, are banished and imprisoned. Organisations such as Amnesty International bring these to our attention – some who go into hiding and others such as the Russian anti-corruption activist Alexei Navalny, who recently went on hunger strike and publicly opposes his government’s actions.

Matthew, Mark and Luke in their gospel accounts of the healing of the daughter describes Jesus, whilst on his way to the house, being touched on the edge of his cloak by a woman with severe bleeding. She was trembling with fear. Jesus says to her ‘Your faith has made you well. Go in peace and be healed of your trouble’. As Christians we are called to stand up for our faith. Do we do so secretly or in public? Are we afraid to do so or are we confident to speak or act in the name of Jesus?

Thanks be to thee, my Lord Jesus Christ,
for all the pains and insults which Thou has born for me.
O most merciful Redeemer, Friend and Brother, may I know Thee more clearly,
love Thee more dearly, and follow Thee more nearly.

Reflection © 2021 Matthew Earl.
Words of Prayer not subject to copyright.
Image freely available online.
A printable version of this Daily Devotional can be downloaded from here
All material within this order of worship is reproduced by permission under CCL 1226356

[box style="1"] ‘An Unbroken, Everlasting Chain of Love’ Join us on Zoom at 10:30am today for a live online Worship…