July 10, 2020Barrie Tabraham2020-07, Devotional
Create a peaceful space to pause, and allow yourself to feel God’s presence alongside you, as near to you as your own breath. In following the reflection below, as a church we will draw closer to God and to one another as we grow in faith and deepen our sense of belonging to God.

24 From there he set out and went away to the region of Tyre. He entered a house and did not want anyone to know he was there. Yet he could not escape notice, 25 but a woman whose little daughter had an unclean spirit immediately heard about him, and she came and bowed down at his feet. 26 Now the woman was a Gentile, of Syrophoenician origin. She begged him to cast the demon out of her daughter. 27 He said to her, ‘Let the children be fed first, for it is not fair to take the children’s food and throw it to the dogs.’ 28 But she answered him, ‘Sir, even the dogs under the table eat the children’s crumbs.’ 29 Then he said to her, ‘For saying that, you may go – the demon has left your daughter.’ 30 So she went home, found the child lying on the bed, and the demon gone. 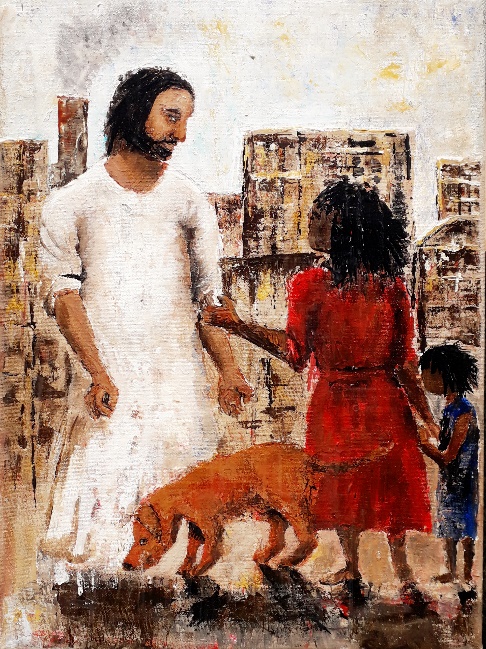 ‘The One with the Crumby Dog’
by Ally Barrett
2019, acrylic on canvas

I came across this enchanting (but puzzling) story the other day, and none of my commentaries on Mark’s Gospel gives a completely satisfactory explanation. At first reading it seems that Jesus is (a) being rather rude to the woman and (b) saying that the Jews were more important than the Gentiles. Now, I believe neither to be the case, and the nearest I can get to understanding the story is this:

First, the term ‘dogs’ in verse 27 does not refer to the savage, street dogs that scavenged for food. Rather, the term – which was a common one used by the Jews for Gentiles (non-Jews) – meant household pets – puppies which would have sat by their owners at table and wagged their tails for tit-bits.

Secondly, Jesus was re-affirming his priority to proclaim the gospel to the Jews – not because the Gentiles didn’t need saving, but because the Jews needed to repent and believe the gospel. His statement showed that, however negative the Jews’ reaction to him might be, God remained faithful to them.

Jesus challenges her to justify her request, and her faith and determination is rewarded. In these turbulent days when the overall effects of the pandemic are being overlaid with issues concerning racial discrimination, Christians need to think through the complicated issues that confront us, and – like that woman so long ago – persist in faith. We thank God that no-one is outside God’s grace, and that the gospel is ultimately a message of hope for all.

Dear God, we thank you that your loving purposes include all people,
no matter what colour, gender, political conviction or creed we may have.
We thank you to that you accept our stumbling, hesitant, steps of faith.

Teach us to persist in our search for truth and justice;
help us to follow more faithfully in the footsteps of Jesus. Amen.

Reflection & Prayer © 2020 Barrie Tabraham.
Images © 2019 Ally Barrett https://reverendally.org.
A printable version of this Daily Devotional can be downloaded from here
All material within this order of worship is reproduced by permission under CCL 1226356