April 10, 2021Hazel Blake2021-04, Devotional
Create a peaceful space to pause, and allow yourself to feel God’s presence alongside you, as near to you as your own breath. In following the reflection below, as a church we will draw closer to God and to one another as we grow in faith and deepen our sense of belonging to God.

16 Now the eleven disciples went to Galilee, to the mountain to which Jesus had directed them. 17 When they saw him, they worshipped him; but some doubted.

Reading the various gospel’s accounts of that first Easter, it appears that Thomas was not the only one of Jesus’ followers to doubt the fact of his resurrection. They had been with him as he taught them about God’s kingdom, they had witnessed many miracles of healing; listened to his warnings to those who treated their fellows unjustly; saw how tenderly he dealt with little children, or those suffering in any way. They had shared in the highs and lows of his ministry – the cheers of the crowds on Palm Sunday and the jeers and calls for his death on Good Friday. They had watched his agony on the cross as his earthly life was extinguished. Each must have had their own grief, their shame of having deserted him in his hour of need. Peter, devastated with the knowledge of his vehement denial to being one of Jesus’ disciples.

On the Sunday, strange, incoherent stories emerged as the women who had gone in loving despair with spices to anoint his body, returned with the first news that he had overcome death. How could it be true? They arrived at the tomb, found it empty, and left very perplexed.

Then Jesus came to those most closely devoted to him in the following days, at various times and places – proving to them the reality of his resurrection. It was overwhelming, beyond their comprehension. Thomas wanted physical proof that this was the same Jesus whom they had seen nailed to the cross and left to die, and was invited to see and touch those crucifixion wounds. It seems he no longer needed to touch as he cried out in wonder “My Lord and my God” Jesus gently reproved him “you believe because you have seen for yourself, but blessed are those who have not seen and yet have believed.” 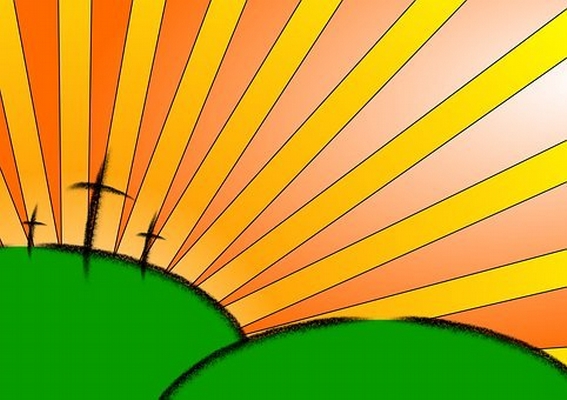 So, despite their doubts and fears over what the future might hold for them, a short while later the disciples obediently gathered on a hillside in Galilee where Jesus had arranged to meet them. There they were commissioned to go and share the good news of his resurrection and the dawn of God’s kingdom come. Charged with such great responsibility Jesus assured them that they would never to be alone in their task, for he would be with them forever.

Their witness, and that of the faithful ever since, is why we too are able to share in the life of the risen Christ. Even we, who have not seen, believe; and our faith is in him who died and yet lives forever. Alleluia!

Living Lord Jesus, we come in wonder and worship you for your great love to us.
May our lives ever praise you, and witness to your risen life by our love and service
as we meet with those who need to know that they, too, are loved. Amen.

Reflection and Prayer © 2021 Hazel Blake. Images freely available online.
A printable version of this Daily Devotional can be downloaded from here
All material within this order of worship is reproduced by permission under CCL 1226356