October 8, 2020Paul Tabraham2020-10, Devotional
Create a peaceful space to pause, and allow yourself to feel God’s presence alongside you, as near to you as your own breath. In following the reflection below, as a church we will draw closer to God and to one another as we grow in faith and deepen our sense of belonging to God.

1 Therefore, since we are justified by faith, we have peace with God through our Lord Jesus Christ, 2 through whom we have obtained access to this grace in which we stand; and we boast in our hope of sharing the glory of God. 3 And not only that, but we also boast in our sufferings, knowing that suffering produces endurance, 4 and endurance produces character, and character produces hope, 5 and hope does not disappoint us, because God’s love has been poured into our hearts through the Holy Spirit that has been given to us. 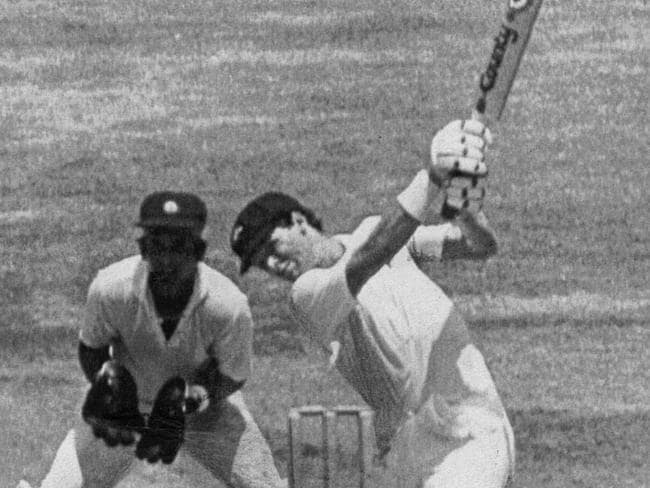 Dean Jones batting at Chennai on his way to 210.

Being a lifelong cricket fan, and having grown up with a love especially for The Ashes’ rivalry between England and Australia, I was saddened to hear recently of the death of Dean Jones, an Aussie batter of style, power, and tenacity. It’s a good rivalry when you can admire your opponents…and yet be desperate to beat them heavily too!

Dean Jones’ most memorable batting performance was in Madras (now Chennai) in 1986, in a test match against India in sweltering conditions. The sun baked the ground, and journalists reported how difficult it was to work in the heat – let alone play cricket in the middle. Dean Jones came to the crease with Australia in a poor position…and proceeded to bat for about eight and a half hours over two days. He was dehydrated, suffered cramps during his innings, and was even sick at the side of the pitch a few times. When batters are out, they normally walk of the pitch and go to their dressing room; Dean Jones was taken to hospital and placed on IV fluids. The test match was eventually tied – an incredibly rare thing in cricket – but the game is remembered as much for Dean Jones’ heroics as anything else. He made a double century in incredible conditions.

This is a gem of a passage from Romans. I’d love to pretend I understand every single word of Romans (but I am not sure I do). I think in these verses Paul is trying to emphasize the difference between God’s greatness on the one hand, and human fragility on the other. Rather than this being a reality which increases the distance between Creator (God) and creature (you and me) it does not, because (Paul says) God is present in all we have to endure and suffer. God’s hope is never extinguished, and so even in sufferings we can be drawn closer to God. Paul is not luridly promoting suffering as if it’s a necessary badge of honour for Christians to wear, but instead saying that whenever we do suffer for the sake of Christ – for the sake of others, for the good of God’s world – then these sufferings are endured with the love of God firmly holding us.

Today, you are reading Emmanuel’s 200th Daily Devotion – another double century in incredible conditions. Every one has brought us some hope for each day, and each is a sign of God’s hope that is always with us. Thank you to all the team for bringing God’s word to life for us.

Thank you God, for the signs of hope in our midst: for hope in adversity,
hope for a better future, hope that even death cannot overcome. Hope that never disappoints.
Thank you that we can be people of hope in the world around us – sharing your good news for those who have none. May your Spirit enable us always to serve you. In Christ’s name. Amen.

Reflection and Prayer © 2020 Paul Tabraham.
Image from https://www.news.com.au/sport/cricket/rip-dean-jones-the-two-innings-which-made-him-a-test-cricket-legend/news-story/6b795ac6848b773928d323ad612c2269
A printable version of this Daily Devotional can be downloaded from here
All material within this order of worship is reproduced by permission under CCL 1226356