April 8, 2021Barrie Tabraham2021-04, Devotional
Create a peaceful space to pause, and allow yourself to feel God’s presence alongside you, as near to you as your own breath. In following the reflection below, as a church we will draw closer to God and to one another as we grow in faith and deepen our sense of belonging to God.

11 But Mary stood weeping outside the tomb. As she wept, she bent over to look into the tomb; 12 and she saw two angels in white, sitting where the body of Jesus had been lying, one at the head and the other at the feet. 13 They said to her, “Woman, why are you weeping?” She said to them, “They have taken away my Lord, and I do not know where they have laid him.” 14 When she had said this, she turned round and saw Jesus standing there, but she did not know that it was Jesus. 15 Jesus said to her, “Woman, why are you weeping? For whom are you looking?” Supposing him to be the gardener, she said to him, “Sir, if you have carried him away, tell me where you have laid him, and I will take him away.” 16 Jesus said to her, “Mary!” She turned and said to him in Hebrew, “Rabbouni!” (which means Teacher). 17 Jesus said to her, “Do not hold on to me, because I have not yet ascended to the Father. But go to my brothers and say to them, ‘I am ascending to my Father and your Father, to my God and your God.”’ 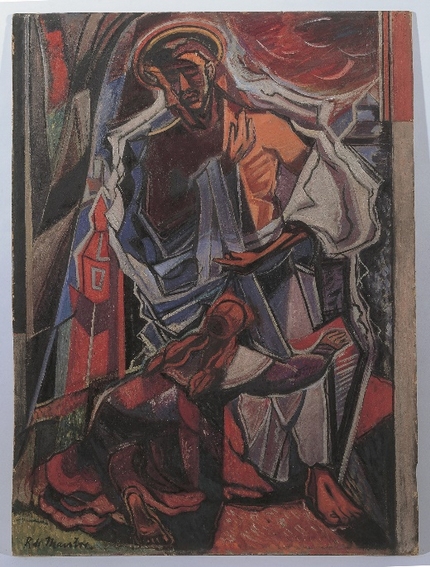 Of all the resurrection appearances of Jesus, Mary’s encounter with Jesus is one of the most poignant. Roy de Maistre shows Jesus, facing us, leaning over the kneeling Mary Magdalene, who has her back towards us. It is still early in the morning and the sky is red with sunrise. The warm red-brown colour of both the landscape and Mary contrasts with the cool blues, white and greys of Jesus and the rocky garden. The mouth of the tomb, in a reddish stone or brick, is visible on the left. The artist, a practising Roman Catholic, was a prolific painter of religious subjects, including other versions of ‘Noli Me Tangere’.

But the words, ‘noli me tangere’ which Jesus utters, are the most intriguing. Some Latin scholars have pointed out that the English translation ‘Touch me not’ (or ‘Do not cling to me’ in some versions) is not strictly accurate. Actually, Jesus is saying to Mary, “Stop what you’re doing” – in the sense that she must not try to keep Jesus on the earth. To cling to him is to prevent him from returning to the Father – and our Lord must, if he is to be present with his people throughout all the future and wherever they call upon him. Whatever burdens we are carrying – whether sorrow, sin or suffering of any kind, which prevent us from seeing Jesus in our midst, we need to remember that he is our Risen Lord, ever-present with his people and always with us.

Risen Lord, you make your presence known to us when we least expect it.
Come to us, we pray, when our need is greatest.
Give us peace when we are troubled; disturb us when we are complacent;
wipe away our tears and give us an assurance
of new hope and new life that your victory over death has won. Amen.

Reflection and Prayer © 2021 Barrie Tabraham.
Image © 2021 Methodist Modern Art Collection, Trustees for Methodist Church Purposes.
A printable version of this Daily Devotional can be downloaded from here
All material within this order of worship is reproduced by permission under CCL 1226356