August 6, 2020Gillian Wood2020-08, Devotional
Create a peaceful space to pause, and allow yourself to feel God’s presence alongside you, as near to you as your own breath. In following the reflection below, as a church we will draw closer to God and to one another as we grow in faith and deepen our sense of belonging to God.

43 When the festival was ended and they started to return, the boy Jesus stayed behind in Jerusalem, but his parents did not know it.  46 After three days they found him in the temple, sitting among the teachers, listening to them and asking them questions. 47 And all who heard him were amazed at his understanding and his answers. 48 When his parents saw him they were astonished; and his mother said to him, ‘Child, why have you treated us like this? Look, your father and I have been searching for you in great anxiety.’ 49 He said to them, ‘Why were you searching for me? Did you not know that I must be in my Father’s house?’ 50 But they did not understand what he said to them. 51 Then he went down with them and came to Nazareth, and was obedient to them. 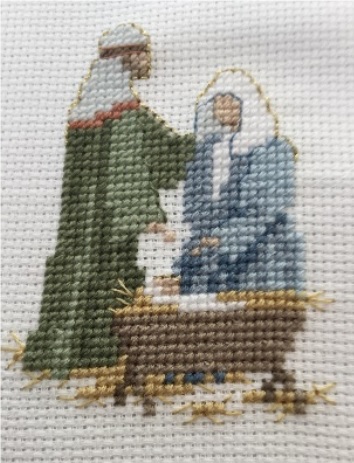 During lockdown, I have been embroidering birthday and Christmas cards and have just finished a nativity scene of Mary, Joseph and the baby Jesus. Only five small cross stitches for the baby Jesus; the scene is dominated by Joseph with his arm on the shoulder of a seated Mary. This is unusual as in most nativity scenes he is a shadowy figure in the background. Joseph appears to be the hidden figure in the story of Jesus and yet his role was vital.

Joseph was chosen by God because he was of the royal house of David and a native of Bethlehem through currently living in Nazareth. He was a devout man who turned to God when problems arose; a disappointed and bewildered man seeing the pregnant Mary; a listening man who obeyed God in spite of his own feelings. He was an action man obeying God’s instruction to take Mary and Jesus to Egypt immediately and later take them back to Nazareth. Joseph was hard working, supporting and caring for his adopted son Jesus, his wife Mary and their growing family; a religious man following the teachings of his faith and taking his family to once a year to a Feast at the temple in Jerusalem. This was the man God chose to bring up His Son, to live and grow in a family and learn the skilled trade of an honest craftsman. Joseph was vital to Jesus’ growth and well-being and yet we so often forget him.

During these difficult times we have rightly acknowledged many people as heroes, rising to the occasion and rightly so, but Joseph’s story made me think about the hidden but vital people necessary to modern society: those who keep the gas, electricity, water and sewage flowing, who provide our telephone, internet, television and radio services. (It is interesting that on the radio they now mention the studio managers who can’t work from home!) I am sure that if you think, you will come up with lots more of these hidden heroes – the Josephs of our modern world. We owe them our thanks too, not just in the present time but also in normal times as our modern society is dependent on their faithful service.

Dear Lord, you set us in families, in communities, where we each rely on others, both known and unknown to us, for the necessities of modern living. Help us not take for granted those hidden in the background, but to appreciate the services they provide for us. We ask you to keep them safe and calm and full of skills as they serve us day by day. Thank you for them all.
This we pray in the name of Jesus, Joseph’s adopted son. Amen

Reflection, Image and Prayer © 2020 Gillian Wood.
A printable version of this Daily Devotional can be downloaded from here
All material within this order of worship is reproduced by permission under CCL 1226356