November 3, 2020Barrie Tabraham2020-11, Devotional
Create a peaceful space to pause, and allow yourself to feel God’s presence alongside you, as near to you as your own breath. In following the reflection below, as a church we will draw closer to God and to one another as we grow in faith and deepen our sense of belonging to God.

25 ‘Now his elder son was in the field; and when he came and approached the house, he heard music and dancing. 26 He called one of the slaves and asked what was going on. 27 He replied, “Your brother has come, and your father has killed the fatted calf, because he has got him back safe and sound.” 28 Then he became angry and refused to go in. His father came out and began to plead with him. 29 But he answered his father, “Listen! For all these years I have been working like a slave for you, and I have never disobeyed your command; yet you have never given me even a young goat so that I might celebrate with my friends. 30 But when this son of yours came back, who has devoured your property with prostitutes, you killed the fatted calf for him!” 31 Then the father said to him, “Son, you are always with me, and all that is mine is yours. 32 But we had to celebrate and rejoice, because this brother of yours was dead and has come to life; he was lost and has been found.”’ 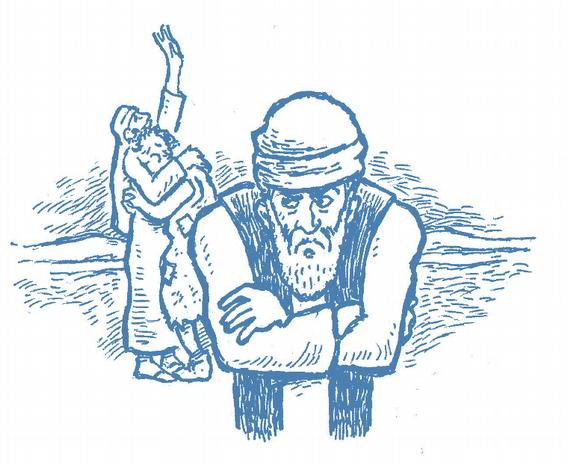 ‘Older Brother Christians’ can be a liability for the Church: outwardly saintly, sober and respectable, but their sins are more subtle than the overt flaws of the younger brother, and can be a stumbling-block to others. The good, upright, faithful senior brother saw his relationship to his father in terms of duty. The result was that his life had become a burden – humourless and joyless.

The tragedy of the older brother ‘saint’ was in the damaging, rippling effects of his attitude. Think of the effect of his refusal to go in and join the celebrations: the embarrassment of the guests, the servants feeling uncomfortable, the hurt his father must have felt, and the feelings of the younger son? His attitude and behaviour illustrate the subtle distinction between saintliness and sanctimoniousness, between goodness and ‘goodiness’. I remember that in the first ever sermon I preached (over 56 years ago), I said that we should be “active in doing good, rather than passive in being good”. Rather simplistic, of course, but I haven’t changed my mind. Colin Morris once said that “sometimes even God finds ‘professional non-sinners’ boring!”.

In the current situation, with so many local variations that have raised tensions between and within communities, Jesus’ story reminds us of the need for tolerance, forgiveness and mutual encouragement. We are all potential saints, and, thank God, there is room for all at the party!

Merciful God, forgive us if we have passed judgment on others
and been complacent or joyless in our Christian living.
Help us to follow the example of the saints in humility, joy and love,
so that we may encourage others to grow in faith
and in the knowledge and love of your Son, our Lord, Jesus Christ. Amen.

Reflection & Prayer © 2020 Barrie Tabraham.
Image freely available online.
A printable version of this Daily Devotional can be downloaded from here
All material within this order of worship is reproduced by permission under CCL 1226356