January 2, 2021Matthew Earl2021-01, Devotional
Create a peaceful space to pause, and allow yourself to feel God’s presence alongside you, as near to you as your own breath. In following the reflection below, as a church we will draw closer to God and to one another as we grow in faith and deepen our sense of belonging to God.

28 Simeon took him in his arms and praised God, saying:
29 ‘Master, now you are dismissing your servant in peace, according to your word;
30 for my eyes have seen your salvation, 31 which you have prepared in the presence of all peoples, 32 a light for revelation to the Gentiles and for glory to your people Israel. 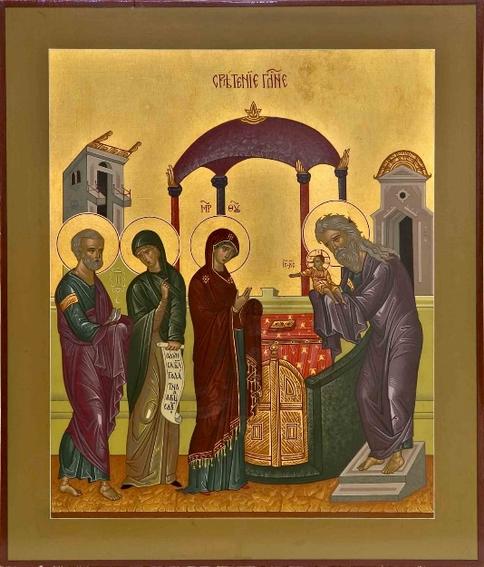 Recently I read that the gospel writer St. Luke was unique in his penchant for male–female parallelism, in being recipients of divine blessing and salvation. An example of this is Elizabeth and Zechariah in chapter one and then Simeon and Anna in chapter two.

The ceremony of purification was necessary because Joseph and Mary were strict Jews and wished to adhere to the Law. Luke was a doctor, well-educated, so he was well versed in Greek and Jewish backgrounds. Archaeology has proved him to be accurate historically in events chronicled in his gospel and in the Acts of the Apostles which is attributed to him.

I am more aware as I get older that historical records cannot often be relied upon. Each account differs, not just in detail but with whole events. This is so in the Bible and between the gospel writers. A few television programmes recently by Lucy Worsley, curator of the Royal Palaces, were fascinating, picking apart, for example, the French and Russian Revolutions, and she spoke of the distortions, and in some cases lies, that history books make.

So, on the good basis of his accuracy, Luke is the only writer who mentions Simeon and Anna. The Holy family is approached by Simeon in the temple, and he cradled the infant baby. Simeon had been told that he would not die until he has seen the Messiah. Then Anna, a prophetess, approaches the family and begins to spread the message of the good news. Isn’t it interesting that Anna is the first to give out the news of the birth of Jesus Christ as the saviour of humankind? The act of hearing does not necessarily mean able to understand and we know that the disciples did not understand at first. Words or actions do not always allow us to understand what is being said or happening.

You probably have an occasion in mind where an event just happens because it just seems right. I remember when my father lay dying on his bed at home and my mother went and laid beside him. It was a very special moment for both of them, as if my father was waiting for my mother to do that. It was a lovely moment for them both and for my mother to cherish now, as minutes later my father passed away.

Simeon’s words, quoted above, which form the ‘Nunc Dimittis’, are so beautiful and I invite you to say it as a prayer, asking God to enable us to go forward in his peace and with him as the Light of the world for the new year.

Reflection & Prayer © 2021 Matthew Earl.
Image freely available online.
A printable version of this Daily Devotional can be downloaded from here
All material within this order of worship is reproduced by permission under CCL 1226356