September 1, 2020Hazel Blake2020-09, Devotional
Create a peaceful space to pause, and allow yourself to feel God’s presence alongside you, as near to you as your own breath. In following the reflection below, as a church we will draw closer to God and to one another as we grow in faith and deepen our sense of belonging to God.

35 Jesus’ disciples came to him: “This is a remote place,” they said, “and it’s already very late. 36 Send the people away so that they can go to the surrounding countryside and villages and buy themselves something to eat.” 37 But he answered, “You give them something to eat.” They said to him, “That would take more than half a year’s wages! Are we to go and spend that much on bread and give it to them to eat?” 38 “How many loaves do you have?” he asked. “Go and see.” When they found out, they said, “Five – and two fish.” 39 Then Jesus directed them to have all the people sit down in groups on the green grass. 40 So they sat down in groups of hundreds and fifties. 41 Taking the five loaves and the two fish and looking up to heaven, he gave thanks and broke the loaves. Then he gave them to his disciples to distribute to the people. He also divided the two fish among them all. 42 They all ate and were satisfied, 43 and the disciples picked up twelve basketfuls of broken pieces of bread and fish. 44 The number of the men who had eaten was five thousand. 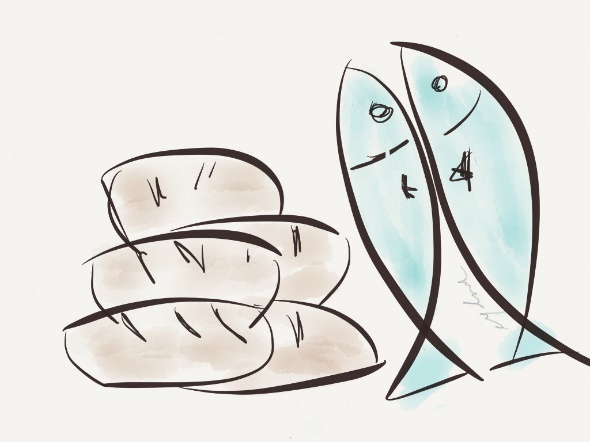 Imagine you were a young lad among the crowds who were there that day…what a story he had to tell when he got home!

“My friends and I were following a young rabbi called Jesus around the hills and shores of Galilee. He tells the most wonderful stories, all about his heavenly father who loves and cares about everyone, not just rich and important folk.  And he loves all the animals, birds and flowers, as well!  Some say Jesus has been healing sick people too.

The most amazing thing happened today as it drew to a close. It was late and the crowds were getting tired, hungry and irritable. We noticed Jesus talking with his close companions. There seemed to be a bit of an argument going on. Seemingly, Jesus was telling them to feed all the people surrounding him. We heard words like “impossible” coming from his disciples. I had some refreshment with me, just some rolls and a couple of fish. So little, but better than nothing. Getting closer to Jesus, I asked one of his disciples, Andrew, to take it to Jesus. How Andrew and others around him laughed at such a paltry amount of food. “Two loaves and five small fishes! What good are they among so many?”  I felt so humiliated! But Jesus didn’t jeer. Taking the food I’d offered, he got all the people to sit down on the grass, and he said a prayer of thanksgiving to God. Then amazingly, he broke the bread and shared my food with the crowd of thousands; men, women and young people like myself. Don’t ask me how, but bickering ceased, and soon everyone was eating, talking together and laughing as food miraculously appeared. Enough for everyone, and basketfuls left over. Jesus is surely someone very special. What a day! I’ll never forget it as long as I live.”

Amazing God, we thank you that you take our little, and make much of it. Accept our lives, and use them to share with others the good news of your love and care for us all. Grant us the blessing of your joy and peace in our everyday lives. Show us where we can be of service to you in our neighbours. And may your blessing be theirs this and every day. We pray in the name of Jesus, our Saviour, and our living Lord. Amen

Reflection & Prayer © 2020 Hazel Blake.
Image freely available online.
A printable version of this Daily Devotional can be downloaded from here
All material within this order of worship is reproduced by permission under CCL 1226356